Excerpt from the Blog of: Lindsey Watts

This past weekend I explored the other famous part of this city called the Gower Peninsula. It has just been rated the 10th best beach  in the world and number 1 in the UK. Naturally, I was going to have to go check it out. I got a few of my friends  together and went for a Saturday afternoon. We were lucky because there was 0% chance of rain 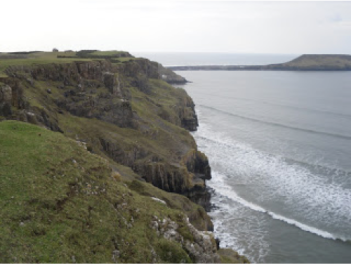 and though there were some cloudy skies and it was very cold, it was still a great day for an adventure. We got on the bus for free(!) and went to Rhossili which is a very small village in the Gower. The village is comprised of a church, a hotel, a few shops and that is it. The village is very cutewith all of the buildings made of stone. However, the village only takes about 10 min to look at. The real attraction is what surrounds it. Looking around for miles, as far as you can see, is beautiful landscape. A view that words can simply not express. I was standing on a piece of land that stopped at the ocean before me, creating stony cliffs, covered in bright green grass and 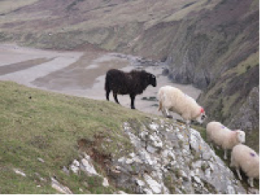 The Gower is composed of many cliffs and an island called Worm’s Head. There is a rocky sea floor tureen that bridges the cliffs’ main land to the island. Many people go across and hike on the island and then come back. However, you must be careful because when the tide comes in the water goes over the rocky bridge and you can be stranded on the island until the tide goes back out. The good news is that there is a small building at the end of the main land where some cute old men volunteer as a coast guard and watch out for those who go over. By the time we made it to the edge of the main land we only had an hour until the tide would be there. Most of us thought that we did not have time to go across and come back, though my friend, Paul, decided to go for it and ended up having to half run there and back. He said he had a great time though and would love to go back and do it when he had more time. I also would like to do that when my parents come and I take them there.

After adventuring around (me climbing down a little bit off the cliff) and Paul finding some caves, we went to the small hotel and had a nice small meal. I had a nice lentil and vegetable soup with some bread and a side of chips (steak fries).

We then looked in a couple of the gift stores they have and then hopped on the bus back by 2:30pm. Before we left we also got a glimpse of a very old church that had graves from the 1800s and some that were from just 20 years ago. I am sure it would be super spooky during Halloween, but it was pretty cool just to see.