Buying Groceries Abroad: A revealing piece on the difference between what’s stocked on the shelves in Orland Park, Illinois versus Lincoln, New Zealand

Before studying abroad in Christchurch, New Zealand I was warned of a phenomena known as culture shock. This occurs when visiting a new country and is the result of a confusing or disorienting feeling when experiencing a new way of life. Essentially, your brain is rewiring. Culture Shock, if it does occur, typically happens to students within their first couple days of studying abroad in a foreign country and is remedied after adjusting to the new lifestyle. I say ‘typically’ because not all culture shocks are the same, or happen around the same time. And for those of you who are lucky enough, this ‘disorienting phenomena’ can hit yet again after you return to the United States, even in some of the most familiar of situations you thought you once understood. I was hit with this reverse culture shock at my local grocery store, of all places.

I had only been home for a couple days and was still succumbing to jet-lag by napping at odd hours of the day. My mom determined that that was enough time to adjust back to my life at home and, with a mother’s intuition, knew I was ready to start running errands for the family again. So there I was: in my local Walmart, shopping basket in hand, leisurely browsing the endless aisles. I began in the produce section and was mildly surprised at the prices: only $1.19 for seedless red grapes? $0.69 for a mango? The bananas were practically free! I remembered the cost of living in New Zealand was slightly higher and I had to take into account the dollar conversion, so I chalked it up to the numbers and moved on, quietly suppressing my unadulterated joy for cheap produce.

My daily breakfast in New Zealand: one free range egg on wheat toast, with the country’s signature fruit, kiwi!

The next items on my list were the essentials to any well balanced diet: eggs, coffee, bread, and peanut butter. While picking these up, I continued noticing that all of these products are cheaper in the States, but the options for each were very different. For example, in New Zealand, the produce available is more dependent on seasonality and therefore more expensive and my favorites weren’t always in stock. In addition, there are only free range eggs. Granted, you have a choice among the free range eggs of white or brown, large or regular, etc. but the store only stocks eggs from chickens that are roaming freely in some part of the New Zealand countryside. In the coffee section, all of the brands proudly bore the Fair Trade Logo, advocating their support of fair purchasing prices from the exporters and higher environmental standards. The peanut butter was made in New Zealand and invited customers to take a tour of the factory and farms. Where were these health conscious and environmentally friendly options in Walmart? Was I missing something? Did they forget to re-stock all of the brands labeled organic or non-GMO? It was somewhere in between searching for the Fair Trade coffee logo and the organic granola that I came to the conclusion that New Zealand gave me a crash course on a higher standard of living, one that is less available in the States. Thus causing the onset of my reverse culture shock. 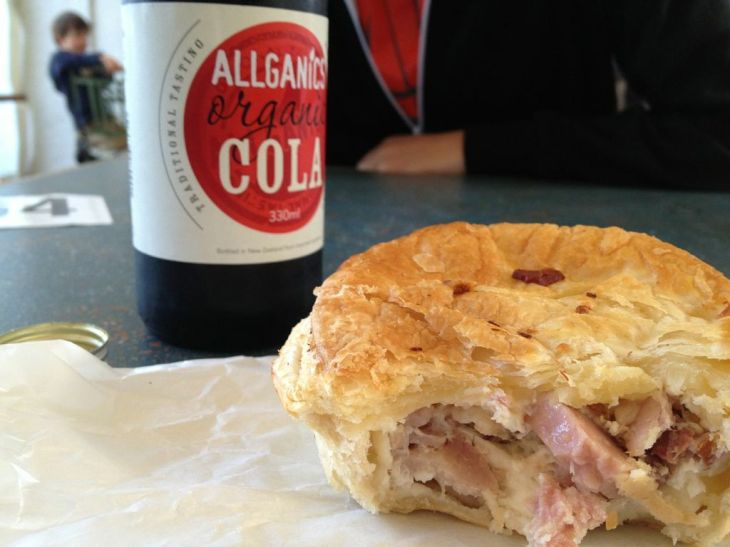 The meat pie is a staple in the average Kiwi’s diet, the organic Cola was just a bonus.

Later, I realized that this higher standard of living is not less available at home, it just comes at a higher cost. A cost that is easily compared when you have the prices of both free range and non-free range eggs on a little yellow label in front of you (and with the former costing almost twice as much as the latter, it’s hard to remember why I care about roaming chickens), as opposed to the grocery store in New Zealand that only has the price of free range eggs as that is the only option. And we do have big chain stores here in the States, such as Trader Joe’s and Whole Foods, that satisfy all of your organic needs but they aren’t the average grocery store. This was shocking to realize once I was back home because it was something I had never noticed before. Buying these types of products had become standard practice for me during my time abroad, and this translated to my life back home. For this, I am grateful that life in New Zealand has made me aware of these different choices and that it has made me a more environmentally conscious consumer, but nothing beats cheap produce!

By illinoisoutreachcoordinator in Australia/New Zealand, Prospective Students, Returned Students on November 1, 2013.
← From Guidebooks to Reality: Amid the Artwork and Tranquility of Asilah, Morocco The Swedish Fika: Adapting to New and Lasting Traditions even when you Return →